SAND AND STONE MEDIA
Manas and Vallari
Santa Cruz, California
Manas and Vallari are two of the kindest people we've ever met. Because of COVID, they decided to have an intimate Indian wedding ceremony in Santa Cruz, California where Manas grew up. The Pandit, or priest, conducted the ceremony where he lit a sacred fire called the agni under the mandap. Agni, the god of fire, sustains life and so gives life to the marriage and serve as a witness where offerings are made.
The ceremony started with the kanyadan where Vallari's father walked her to the ceremony site with smiles on everyone's faces. Manas and Vallari then exchanged rings. After kanyadan was the hastamelap where the bride's mother pours sacred water onto the couple's hands. During the ceremony, they had a mix of herbs, rice and flowers to offer to the holy fire, which is in the center of the mandap to complete the prayers. This practice is called Havan. Theri ceremony included homam, exchanging jewlrey including maang tikkas and many prayers. At the end of the ceremony is the Saptapadi where Manas and Vallari took seven steps together. Each step represents something different including developing mentally and spiritually, increasing their wealth and comfort, acquiring knowledge and happiness by mutual love and respect, posterity, living long lives, and remaining committed to each other. Each step is like a vow to be committed to each other. During these steps, Vallari touched seven beetle nuts in turn with her toe, while Manas helped her keep her balance. It is said that the couple has tied themselves together for seven future lifetimes once this part of the ceremony is finished.
Finally, Manas tied a necklace made of gold around Vallari's neck called the Mangalsutra, the groom’s gift to the bride.
At the end of the ceremony, there was no kiss but there was the Muhurtham where Manas and Vallari were separated by a beautiful cloth, known as an antarpat. The use of the cloth is to symbolize the bride and groom’s individual lives before their marriage.  During the designated moment, the antarpat will be lowered and the symbolism of the couple’s coming together will begin. They exchanged jai mala is a garland comprised of strung flowers that is exchanged between the newlyweds. The ritual ends with each half of the couple wearing one. The jai mala symbolizes the partners welcoming each other into their families. Without it, the marriage isn't considered complete. The whole day was bright and colorful full of so much learning since it was mine and Ben's first time capturing an Indian Wedding. They shared dinner with friends and family along with toasts. It was as Mana's said "something straight out of a Bollywood movie." 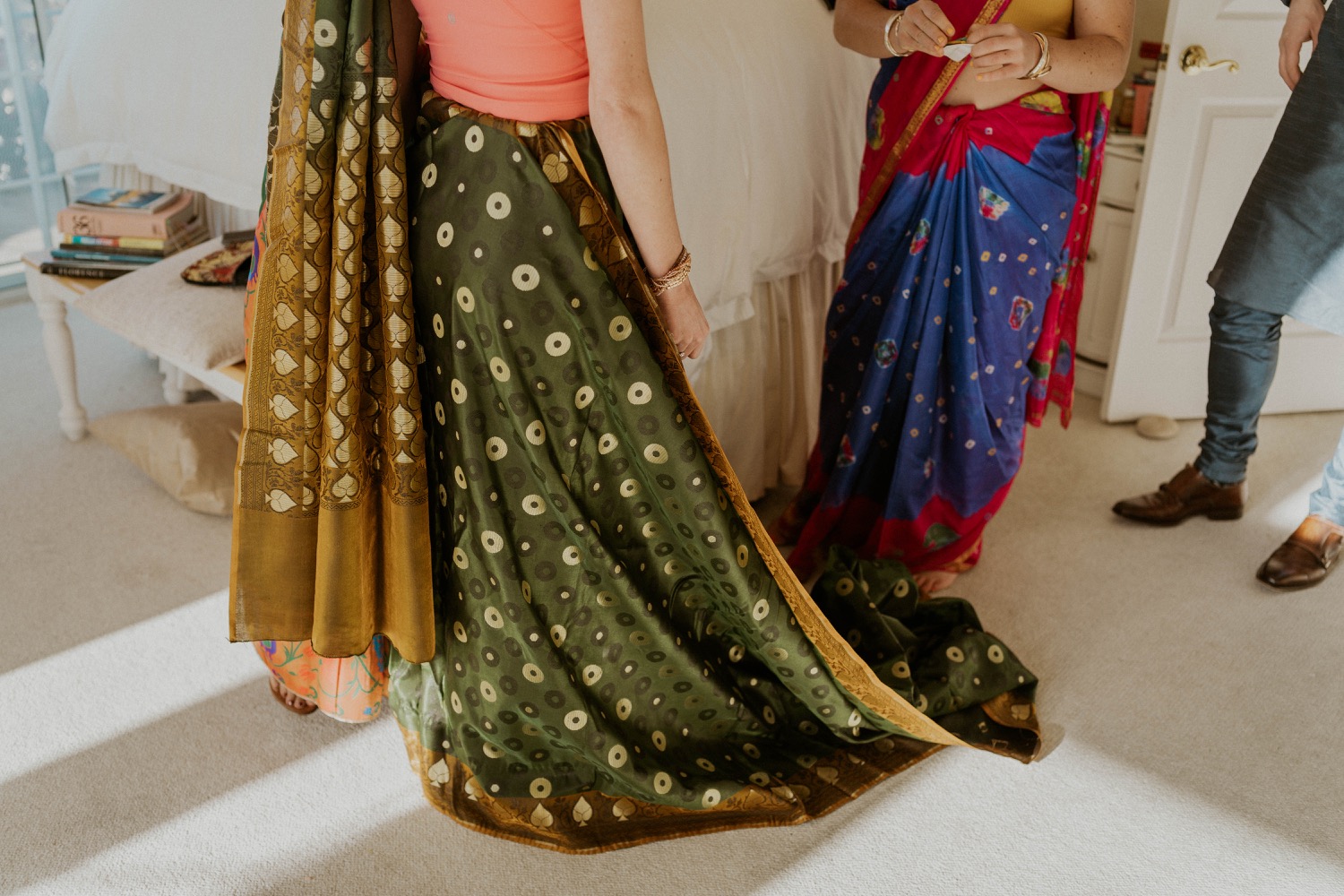